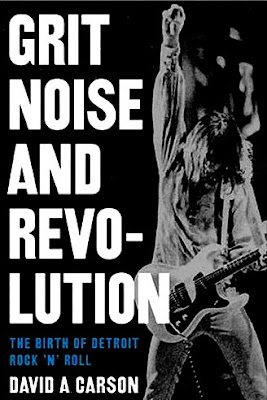 Found a great post today on this book and it's great.

What musicians/artists would you go and see if a time machine was at your disposal? A question that us music junkies talk about during our Rob Gordon moments. Some people might go towards a certain performance, but several would like to just get transplanted to a particular city or time.

1960's Detroit always comes up in the proverbial time machine scenario. At least it does whenever I've had that conversation. That's because it's usually one of my first choices. A chance to have witnessed The MC5 and Funkadelic share a stage would be worth the trip alone. A scene so rich in history and amazing music it's scary. You just had to deal with the occasional city-engulfing riot.

It's a story told in the 2005 book Grit, Noise and Revolution. Author David Carson (a Royal Oak native) creates a thorough timeline of how the city's music scene evolved. Starting with John Lee Hooker's arrival in the 1940's, and concluding with the demise of The MC5 in the early 70's, all the sounds and styles of the city get covered. From the early R&amp;B of Hank Ballard, Jackie Wilson, &amp; Andre Williams; to the chart-topping success of Alice Cooper and Grand Funk Railroad. Along the way you get to know about the radio stations, dee-jay's, record stores, club owners, and indie labels, that all played a part along the way.

It does cover a lot of ground, but the heaviest focus in the book centers around The MC5, John Sinclair/Trans-Love Energies, and the Grande Ballroom. Reading their story you learn that The MC5 were almost doomed from the start. A band that persevered, to a certain level, with almost every obstacle possible trying to stop them.

They just wanted to play music, but were sidetracked by politics, their association with the more extreme elements of the underground movement, the business end of the industry, and authority figures. The police didn't really take a shine to hippies. The ones that were demanding free dope, fucking-in-the-streets, swearing during public performances, all while doing it at maximum volume, tended to get extra scrutiny. It wasn't a very peace-and-love like vibe happenin' around the band. It had too have been quite an alarming site for the conservative types, and a revelation for the youth of America. The MC5's story may be the main one in this book, but it wasn't the only one.

Because the book encapsulates such a large number of bands and artists, several will inevitably get short changed in the book. Would've loved to have read more about Suzi Quatro's days with the Pleasure Seekers. Funkadelic/Parliament only getting a couple of pages seems weak.

Even the amount of Stooges material seems very, very light in comparison to their impact. Reading a little on the later projects involving these artists - Sonic Rendezvous Band, Destroy All Monsters, etc - would have also been nice. This really is my only complaint (if you actually want to call it that) about the book.This one is recommended to anybody who wants to get a general overview of the Detroit rock 'n' roll scene. MC5 fans will probably get the most from it.

If your looking for more in depth material, I would go with something centered around that individual artist, band, or label. This is a very quick read that you can breeze through in no time.

"It was seeing the MC5 at the Grande Ballroom that opened our eyes. I can't describe in words what it meant to witness the power of that band live"- Ted Nugent

I wish I could have witnessed it with you Mr. Nugent. Just think about it. Me and Teddy hangin' out at the Grande Ballroom circa:1968. Two duders just waiting for the "Five" to hit the stage at any time. I'd buy you a beer and...oh yeah, you don't drink. We could go out back and smoke a joi...you don't do that either. We could just talk about the current state of politi...uhhhmm. I'm gonna go hang out with Ron Asheton 'til the show starts.Choosing something to represent Detroit rock music from this era is like shooting fish in a barrel.

The choices are plentiful. Since the book focused on them so heavily, I thought we should go with The Motor City Five. Kick Out the Jams is everywhere.

Y'all know and love that one. Back in The USA has good material but suffers from sub-par production. High Time, the bands final release, is the total unsung hero from the band and my personal favorite. Any information about these records, and their early 45's, can be found all over the interweb. We'll try and get all Wally Walker on you with some deep cuts.During the mid-to-late 90's, Alive/Total Energy seemed to be cranking out live relics from the MC5 at a frenzied pace. The sound quality on these releases varied, but that wasn't unexpected at all.

It was a chance to hear the band doing material that didn't show up on their proper releases. A chance to hear them doing covers of both James Brown and Pharoah Sanders. A chance to hear 10+ minute versions of "Black to Comm". It was enough of a tease that made you wish it sounded just a tad better. Power Trip was one of the first releases to come out during that 90's onslaught of live/rare MC5 material.

This 10" record features four songs taken from a 1968 performance at the First Unitarian Church in Detroit, and two previously unreleased studio recordings from late 1970. Highlights from the live portion include a cover of Ray Charles "I Believe to my Soul" leading into a frenzied take of "Black to Comm". The quality of the live material is fair.

Not quite on the level of Kick out the Jams, but I've heard worse. The two studio tracks are instrumentals and are markedly better in quality. Not sure what these two songs were intended for. They might have been outtakes, unfinished works-in-progress, miscellaneous jams on tape, or something else. If anybody knows, drop a comment.

There is a Power Trip CD (with different cover art) out there, but the track listing is slightly different from this out-of-print vinyl version. The two studio tracks are listed on it. "Black to Comm" and "I Want You" also show up. Are these cuts the same live recordings that appear on this slab of wax? I don't know. I haven't heard the CD. With the amount of MC5 boot's out there, it's almost certain that these live songs have popped up elsewhere at some point.

This is obviously a record for the hardcore fans. More of a completest item and not a launching point. If you don't have their LP's already, what the hell are you reading this for. You should be on the way to the record store with cash in hand. Sundazed has done vinyl re-issues of all three albums, so they should be available at your local mom-and-pop record shop. Buy those records, shake your ass, and then come back to stuff like...