DENNIS THOMPSON'S INTERVIEW IN A TRIBUTE TO KEITH MOON 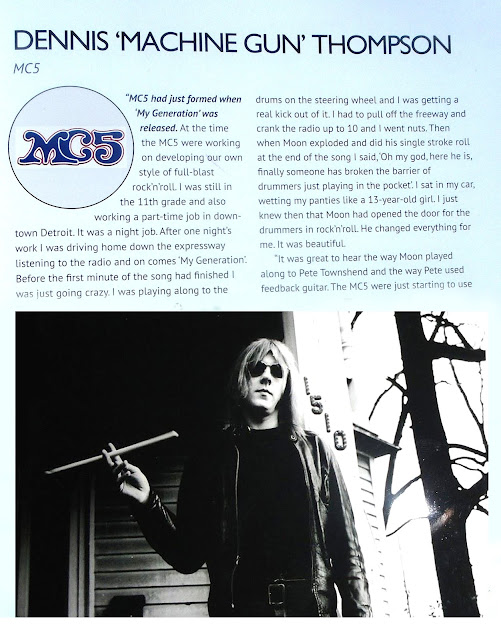 With an introduction by Pete Townshend, There Is No Substitute is a tribute to The Who's late drummer Keith Moon, compiled by Ian Snowball with the authorization of the Keith Moon Estate and Keith's daughter Amanda de Wolf. The book includes a collection of seen and unseen photographs and contributions from friends and fans of Keith - a diverse cross section of drummers, musicians, fans, writers and people that knew him.

Dennis contributed a loving tribute to his favorite rock drummer of all time Keith Moon: 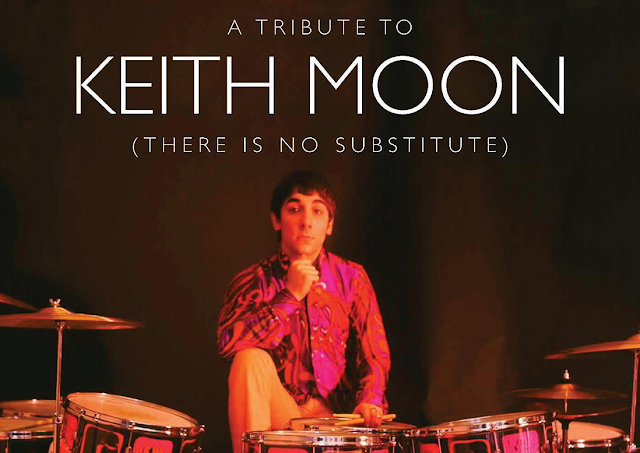 The MC5 had just formed when My Generation was released. At the time the MC5 were working on developing our own style of full-blast rock and roll. I was still in the eleventh grade and also working a part-time job in down-town Detroit. It was a night job. After one nights work I was driving home down the expressway listening to the radio and on comes My Generation.

Before the first minute of the song had finished I was just going crazy. I was playing along to the drums on the steering wheel and I was getting a real kick out of it. I had to pull off the freeway and crank the radio up to ten and I went nuts. Then when Moon exploded and did his single stroke roll at the end of the song I said ‘oh my god, here he is, finally someone has broken the barrier of drummers just playing in the pocket’.

I sat in my car, wetting my panties like a thirteen year old girl. I just knew then that Moon had opened the door for the drummers in rock and roll. He changed everything for me. It was beautiful.

It was great to hear the way Moon played along to Pete Townshend and the way Pete used feedback guitar. The MC5 were just starting to use feedback too. The Who and the MC5 were on the same plane; but the Who were two years ahead of us. After hearing My Generation on the radio I went and bought the first album and played it until the grooves were worn out.

When I listened to music and I liked the drummer I would study him. You can call it research or mentoring or you can call it stealing. This is what I did with the Who and Keith Moon.

The Who were my number one band, which was great because a little bit down the road the MC5 were playing at the Grande Ballroom, it’s a bit like the NYC Fillmore but in Detroit.

Now Detroit is a tough city, very industrial, very hard-working and very hard-partying. The MC5 played at the Grande Ballroom almost every weekend.

Eventually more national bands like Janis Joplin, Cream and Led Zeppelin came to Detroit. The Who came too and the MC5 got the chance to open up for them. The place was packed, so much more over the allowed fire-capacity limits. The MC5 went on first and did what we had been doing for a while and had borrowed from The Who. We destroyed our equipment.

Being from Detroit and having been playing the Grande for a while we felt like the Grande was our house, it was very much an attitude of ‘you’re in our house now baby,’ and the crowd loved us and we made good progress.

We included in our set lots of songs that we had liked from the invasion of the British bands like the Animals and The Kinks. We just lifted songs that we liked and played them.

We even did our own version of My Generation. We were still at a time when we were earning our bones and getting our chops together. The audience recognized lots of the songs and just went f**ing bananas and at the end of our set we just smashed our equipment.

The crowd loved us and our ‘high energy’ music. At the time other bands called their music a ‘rave up’ but we called ours ‘high Energy’. It’s what happens when a band just goes for it. That’s why we used to say ‘kick out the jams motherfuckers or get off the stage’. We didn’t want any weak-arse music like they were playing in California.

The Who came straight on after us and the audience in the Grande wanted more ‘high energy’ music, this was what the hard-working people from Detroit wanted. But it was okay because the Who played tough rock and roll. The Who loved playing in Detroit. They came and played the Tommy opera at the Grande.

Not too long after The Who that night that the MC5 opened for The Who they came back to the Grande and we got invited back, only this time the Who stipulated that we go on after them instead of opening for them. I guess they wanted to do their ‘auto-destructive art’ before us.


READ MORE IN "A TRIBUTE TO KEITH MOON"