DODGE MAIN: “THE HEART OF DETROIT” 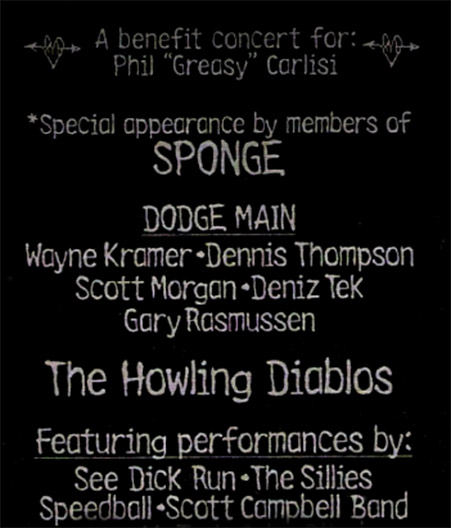 The year is 1997. Phil “Greasy” Carlisi, my longtime good friend and bass player mate when we played together in Sirius Trixon &amp; The Motor City Boys had suffered 4 heart attacks and owed the doctors/hospitals a wheelbarrow of Benjamins. Greasy now tours with Robert Gordon. He is doing quite well, thank you.

The “Heart of Detroit” concert event was created by yours truly and point man Scott Campbell, along with Jim Edwards and a few other prime movers. We did succeed in raising $30,000 for Greasy’s med bills. Yeah! That felt real good.

I hit the media with a passion. I spoke on every Detroit radio station promoting the event. All the deejays jumped on board including Doug Podell from WRIF, Ralph Valdez and Martin Bandyke of WDET, Karen Savelly from WCSX.

One night at Detroit’s State Theater, (the owners generously donated the facility for free), we organized a bill including Dodge Main whose members consisted of, Scott Morgan of the Rationals, Wayne Kramer &amp; I from the MC5, Gary Rasmussen from the Up and Sonic’s Rendevous Band and Dr. Deniz Tek from Radio Birdman. Sponge, who were extremely popular at that time, were cool enough to show up and do a set, and six other noteworthy bands. (See poster)

I also sat in with the Scott Campbell Group and had a blast. Playing with Deniz Tek was a highlight for me as we toured together in the early 80”s as the New Race with Ron Asheton of the Stooges. Brought back many fine memories. Wayne Kramer flew in from LA and ripped it up. The monies we raised also covered all our expenses.

Seeing all those people come together to help Phil really affected me in a most positive manner. Never before had I seen all so many busy professionals give freely of their time and energy to help out a fellow band mate in such serious trouble.

All the financial stress Greasy was experiencing went south. I do not believe he has had a heart attack since. I was a co-host of this event. Reminds me of the time the MC4 got together in 1992 to play a benefit for Rob Tyner’s (lead singer of the MC5) wife and family when he passed in 1991.

Everyone on the bill kicked out the jams as only Detroit Rockers can do. We have a magic in this town that you won’t find anywhere else. Fans and players… Hmmm, maybe I’ll do this again soon for somebody…