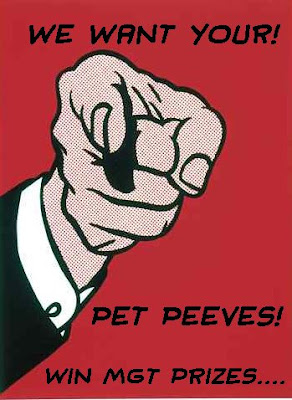 Come on folks we have until May 25!
Let's See Some BIG Peeves!

The current state of pop music.

Air Guitar. Don't do it. You look like a dork.

People who invade my personal space, at least when I don't want them to. Step too close, and I will take a step back. I'd back all the way around a room to keep an unwanted person out of my personal space.

Goddam stoopid nationwide "talent" TV contests...Dammit!
1 Goddam piece of ringpiece paper in the public toilet!!!
People that realize that a lane of traffic is backed up so they go into the next lane over because it is moving quicker and they go up to the front and expect someone to just let them back over in that lane.
Posers & Name Droppers

Whining, complaining. If you got a problem, do something about it, don't bore anyone else with your dreary travails (unless you're posting pet peeves comments on MGT's blog).

Anonymous posters at least leave us your email or how can we send you a prize?