GUEST POST:MC5 BACK IN THE USA 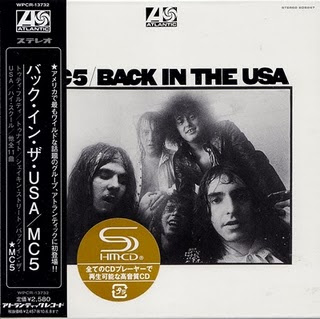 The MC5 had a promising beginning which earned them a cover appearance on Rolling Stone magazine in 1969 even before their debut album was released. They developed a reputation for energetic and polemical live performances, one of which was recorded as their 1968 debut album "Kick Out The Jams".

Their initial run was ultimately short-lived, though within just a few years of their dissolution in 1972, the MC5 are cited as one of the most important American hard rock groups of their era. Their three albums are regarded by many as classics, and their song "Kick Out the Jams" is widely covered. 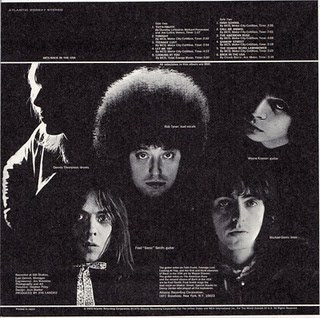 While lacking the monumental impact of "Kick Out the Jams", the MC5's second album is in many regards their best and most influential, its lean, edgy sound anticipating the emergence of both the punk and power pop movements to follow later in the decade. Bookended by a pair of telling covers -- Little Richard's "Tutti Frutti" and Chuck Berry's "Back in the U.S.A." -- the disc is as much a look back at rock & roll's origins as it is a push forward into the music's future; given the Five's vaunted revolutionary leanings, for instance, it's both surprising and refreshing to discover the record's emotional centerpiece is a doo wop-inspired ballad, "Let Me Try," that's the most lovely and gentle song in their catalog. 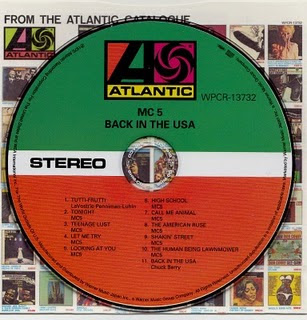 The recurring theme which drives Back in the USA is adolescence, its reminiscences alternately fond and embittered -- while cuts like "Tonight," "Teenage Lust," "High School," and "Shakin' Street" celebrate youth in all its rebellious glory, others like "The American Ruse" and "The Human Being Lawnmower" condemn a system which eats its young, filling their heads with lies before sending them off to war.

Equally gripping is the record's singular sound -- produced by Jon Landau with an almost complete disregard for the bottom end, Back in the USA captures a live-wire intensity 180 degrees removed from the group's live sound yet perfectly suited to the material at hand, resulting in music which not only salutes the power of rock & roll but also reaffirms it.