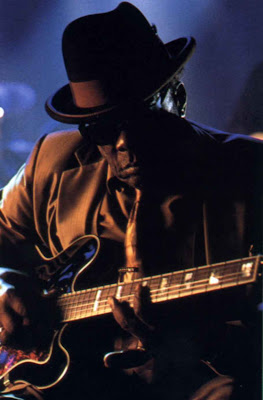 
John Lee Hooker (August 22, 1917 – June 21, 2001) was a Grammy Award-winning influential African American singer-songwriter and blues guitarist, born in Coahoma County near Clarksdale, Mississippi. Hooker began his life as the son of a sharecropper, and rose to prominence performing his own unique style of what was originally closest to Delta blues. He developed a half-spoken style that was his trademark. Though similar to the early Delta blues, his music was rhythmically free. John Lee Hooker could be said to embody his own unique genre of the blues, often incorporating the boogie-woogie piano style and a driving rhythm into his masterful and idiosyncratic blues guitar and singing. His best known songs include "Boogie Chillen" (1948) and "Boom Boom" (1962).

Hooker's life experiences were chronicled by several scholars and often read like a classic case study in the racism of the music industry, although he eventually rose to prominance with memorable songs and influence on a generation of musicians.

Hooker was born the youngest of the eleven children of William Hooker (1871–1923), a sharecropper and Baptist Preacher, and Minnie Ramsey (b. 1875). Hooker and his siblings were home-schooled. They were permitted to listen only to religious songs, with his earliest musical exposure being the spirituals sung in church.

In 1921, his parents separated. The next year, his mother married William Moore, a blues singer who provided Hooker with his first introduction to the guitar (and whom John would later credit for his distinctive playing style). Because of this, it can be said that Hooker was raised in a musical family. He was cousin to Earl Hooker. Hooker was also influenced by his stepfather, a local blues guitarist, who learned in Shreveport, Louisiana to play a droning, one-chord blues that was strikingly different from the Delta blues of the time.The year after that (1923), John's natural father died; and at age 15, John ran away from home, never to see his mother and stepfather again. 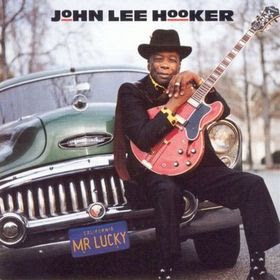 Throughout the 1930s, Hooker lived in Memphis where he worked on Beale Street at the New Daisy Theatre and occasionally performed at house parties. He worked in factories in various cities during World War II, drifting until he found himself in Detroit in 1948 working at Ford Motor Company. He felt right at home near the blues venues and saloons on Hastings Street, the heart of black entertainment on Detroit's east side. In a city noted for its pianists, guitar players were scarce. Performing in Detroit clubs, his popularity grew quickly, and seeking a louder instrument than his crude acoustic guitar, he bought his first electric guitar.

Hooker's recording career began in 1948 when his agent placed a demo disc, made by Hooker, with the Bihari brothers, owners of the Modern Records label. The company initially released an up-tempo number, "Boogie Chillen", which became Hooker's first hit single. Though they were not songwriters, the Biharis often purchased or claimed co-authorship of songs that appeared on their labels, thus securing songwriting royalties for themselves, in addition to their streams of income. 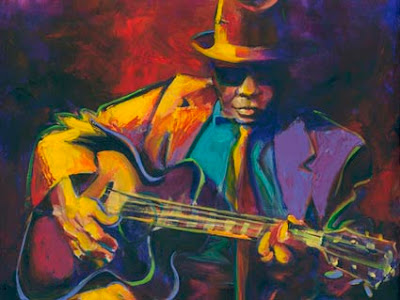 Sometimes these songs were older tunes which Hooker renamed as with B. B. King's "Rock Me Baby", anonymous jams "B.B.'s Boogie" or songs by employees (bandleader Vince Weaver). The Biharis used a number of pseudonyms for songwriting credits: Jules was credited as Jules Taub; Joe as Joe Josea; and Sam as Sam Ling. One song by John Lee Hooker, "Down Child" is solely credited to "Taub", with Hooker receiving no credit for the song whatsoever. Another, "Turn Over a New Leaf" is credited to Hooker and "Ling".


Despite being illiterate, Hooker was a prolific lyricist. In addition to adapting the occasionally traditional blues lyric (such as "if I was chief of police, I would run her right out of town"), he freely invented many of his songs from scratch. Recording studios in the 1950s rarely paid black musicians more than a pittance, so Hooker would spend the night wandering from studio to studio, coming up with new songs or variations on his songs for each studio. Due to his recording contract, he would record these songs under obvious pseudonyms such as "John Lee Booker", "Johnny Hooker", or "John Cooker."