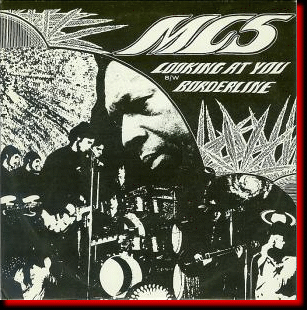 Before heavy metal and punk split off in the mid-seventies, there was nothing but...this.

“Looking At You”/ “Borderline” was The MC5’s second single and it showed them a light year away from the terrain of their first 45, “I Can Only Give You Everything”/”One Of The Guys.” More than a light year away and further, in terms of their ever-increasing confidence with writing their own songs as well as capturing their ever-accelerating onstage energy. 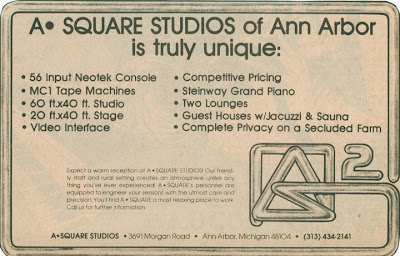 Aided by the production of manager John Sinclair, it was recorded live in the studio for the tiny, local A-Square label (I for one can’t spot an overdub anywhere on it) completely in the red...No, make that the deepest shade of crimson verging into violent violet. It’s a killer on every level. Only precious few independent single releases of this time of bands at their earliest stages even came in picture sleeves, not to mention with stylish, head-directed, hand-drawn labels; here lovingly inked by Detroit artist, Gary Grimshaw. And fewer still singles wreaked this much havoc and earsplitting chaos while sending ending unending sparks throughout BOTH sides. 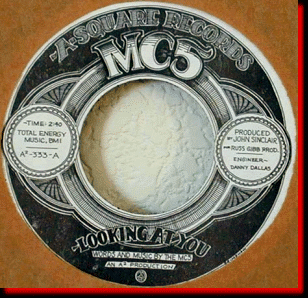 The rather sheepish and low opening bass line of Michael Davis opens “Looking At You,” offering no clue as to the emphatically harsh and distorted fray about to commence. It lands with no warning and continues for the entire track when the rhythm and lead guitar enter simultaneously: the rhythm is taking the high road slashing out while the lead…takes the high road, too with resounding barrages of fury f**k clusters that rebound all over the place like crazy.

And Dennis Thompson’s drumming is clattering up all the remaining few corners of sonic space. Which are precious few as the two MC5 guitarists are now throwing the whole piece into a howling bonfire that sends everything rushing up in so many directions at once it’s hard to keep track of everything. Especially when lead vocalist Rob Tyner is directing the piece upward with run-on vocal directives the like of “Everybodyhavin’agoodtimeyeah!”

In between the two razing solos, all is simmering feedback, allowing Tyner to continue from “Open up my eyes, baby…All I ever want to do/ Is look at you…” with the several sweet and lovingly repeated intonations of “Looking at you...” -- Just in time for Kramer and “Sonic” to combine and shoot the whole thing into a final, highly combustible conflagration.

“Whew,” you can just catch Tyner say on the fade, and “Whew” is right: there’s really nothing left to say after hearing this breathtakingly REAL track for the first time except, if you feel up to it: the flipside, “Borderline.”

And here again, it is a sloppy, over-recorded monster. I mean, the introductory howl of feedback is the quietest thing on it apart from two briefest of halts right before the repeated Tyner chorus. 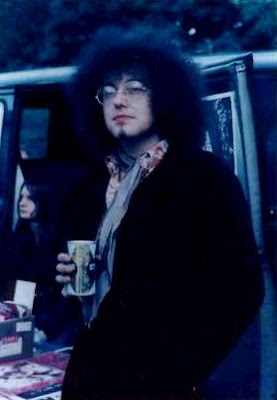 Rob Tyner
It’s primitive and at least two steps behind in tempo from the version recorded for “Kick Out The Jams” but no less effective, especially with Michael Davis’ bass clustering straining to keep up with the speed and advancement of Kramer and “Sonic”’s ever-sick ricochet of rhythm, compressed wave of fuzz guitar. The mega-recorded guitars are almost edged out by Tyner’s, whose voice comes booming out of the mix and directly in your face.

He’s trying to find out if what he’s feeling is what his woman’s feeling, and his emotional tightrope is skinnier than just a borderline: It’s tearing him up inside, and he’s just got to know, so that when all instrumentation cuts out for his vocal yearning-ness of “wooooooooooooooooooooo...” it’s a grand plea from the heart and no mistake.

It’s somewhat scary AND amazing to think that nine short months from the release of this single they would be onstage recording their debut album for a major label. Live, no less. And it would be a further light year away from this.

Fills one with awe-provoking silence.