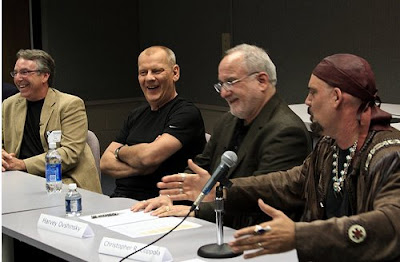 I got to see my dear friend Harvey Ovshinsky again as we sat on Christopher Coppola’s Creativity Panel at Madonna University last Friday night. This was one of many festival events during Project Accessible Hollywood’s week long run at Madonna University. The Creativity Panel consisted of Christopher Coppola as moderator, Eric Bruneau, the executive vice president and creative director of Armstrong White. An award winning digital creative director and animator with four Academy Award nominations. Harvey Ovshinsky, journalist and documentary filmmaker, (amongst his many other talents), Tom Grace, novelist and architect, Douglas Semivan, Department Chair, Fine Art at Madonna University, and myself as the song writer/drummer with the controversial 1960s Detroit rock group The MC5... 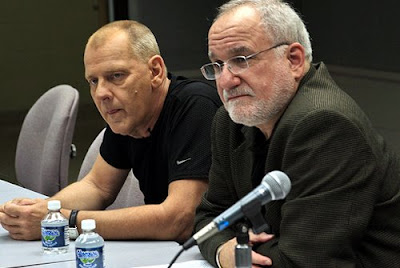 Christopher is the nephew of the great Francis Ford Coppola noted director of The Godfather Trilogy, (and as you all know), a boatload of many other excellent movies. By the way, Christopher’s brother is Nicolas Cage the superb actor. This panel was absolutely educational for yours truly. We discussed the four elements of the creative process drawn from the book, “The RSVP Cycles”, by Lawrence Halprin. They are: RESOURCES – These are the human and material resources available to inform and enrich the creative process; the resource base includes a physical inventory and a project program, objectives and expectations SCORE – As in a musical score or the choreography of dance; the score orchestrates design, participation, events and activities that visibly delineate, generate and sustain a project VALUACTION – As an integral part of the process, people’s feelings and belief systems, as well as community needs and desires must be integrated with a decision-making process that respects, acknowledges and incorporates these values PERFORMANCE – Includes the product and its evolution over time; this component of the Cycles anticipates an organic, non-static solution; an environment or result that is defined by those who use it, experience it, and appreciate it. REFERENCE – The Rsvp Cycles : Creative Processes in the Human Environment – Lawrence Halprin [1969]

We have posted some video clips for your enjoyment.
Stay tuned as the next post is coming straightaway Yours in Peace, MGT