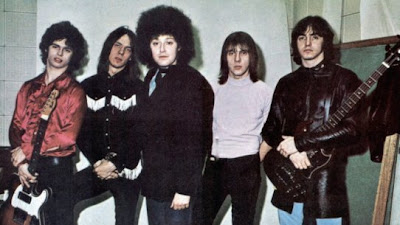 This disc of rare live material from the MC5 begins with spiritual advisor Brother J.C. Crawford inviting fans to come to the band's upcoming free shows at Detroit's Grande Ballroom, where the MC5 will be recording a concert for their first album on Elektra Records.

What follows is three outtakes from the two shows recorded for the epochal Kick Out the Jams, and while nothing here quite matches the energy of "Ramblin' Rose," "Borderline," or the title cut from the Loudest and Wildest Live Album Ever, it does feature some rare high-fidelity MC5 live stuff that didn't appear on that album.

However, once track five, "I'm Mad Like Eldridge Cleaver," kicks in, listeners are back in the land of muddy-sounding and poorly packaged MC5 recordings, which have become surprisingly common in recent years. The Kick Out the Jams outtakes -- "Motor City Is Burning," "I Believe to My Soul," and "Rocket Reducer No. 62" -- capture the band sounding tight and focused, and the recording quality is rich and clear.

The other material finds the band in more "experimental" mode, especially on "I'm Mad Like Eldridge Cleaver" (which is never as good as its brilliant title) and the meandering blues jam "Ice Pick Slim," and while the group's explorations of the outer limits of musical possibility were always a vital part of its performance, history teaches us that no band always taps into genius while it's jamming, and these tracks take a long, long time to get anywhere.

(Thankfully, the final tune, a rip though the Five's classic "Black to Comm," at least brings some the band's legendary energy and guitar firepower to the fore.) The recording quality of the non-KOTJ stuff is treble at best and tinny sludge at worst, and while this disc gives some indication why the MC5 were one of the greatest bands of their time, the fact is that their legacy has been much better served elsewhere. ~ Mark Deming, All Music Guide