Wild Eye GOLD: Before Woodstock. Beyond Reality on DVD, July 27, featuring a soundtrack of unreleased music from the MC5.

“…In 1968, filmmaker Bob Levis led a rag-tag band of dreamers, drop outs and drug-happy darlings into the wilderness to make a movie and emerged a month later with ‘GOLD’”, a bizarre and beautiful journey into the mind and madness of the late 1960s – one overflowing with fantasies of revolution, recreation and raunchy free love.

“At once a western, a comedy, a ‘nudie’, a drama and a musical – ‘Gold’ is a profound potpourri made in the spirit of shaking down square society, while systematically shattering every movie rule in the process. But then the film vanished, lost like the generation from which it came, until now…” 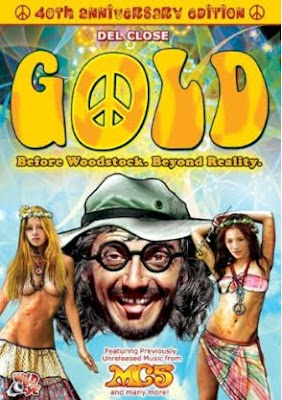 
In the feature Pirate Radio, the character played by actor Phillip Seymour Hoffman is based on Ronan O’Rahilly (‘Radio Caroline’), the producer of GOLD. Ronan managed the MC5 for a time while they Lived in the UK.