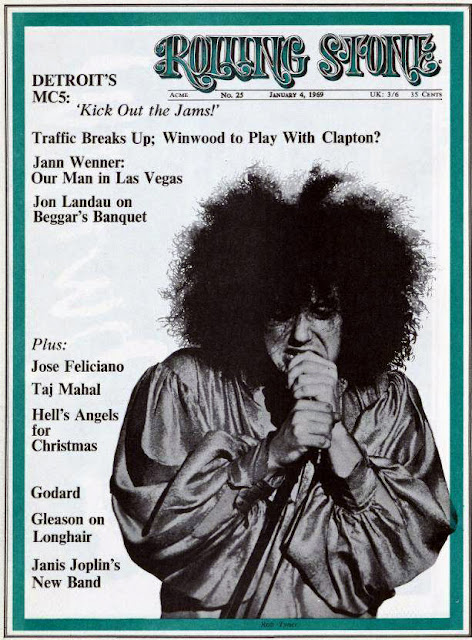 The MC5 made the cover of the Rolling Stone before they ever had a record deal..I had a drum endorsement with Ludwig the #1 drum manufacturer of the time. Pretty big deal eh? -D

Some called the MC5 (for "Motor City Five," after their home base) the first '70s band of the '60s. The group's loud, hard, fast sound and violently antiestablishment ideology almost precisely prefigured much of punk rock. There was, however, one crucial difference: The MC5 truly believed in the power of rock & roll to change the world. The band first formed in high school and came to prominence in 1967–68 as the figureheads (or "house band") of John Sinclair's radical White Panther Party.

At concerts and happenings the band caused a sensation by wearing American flags and screaming revolutionary slogans laced with profanities. In 1968 the MC5 went with Sinclair to Chicago to play while the Democratic Convention was under way. Its debut LP (#30, 1969), recorded live in 1968, captured the band in typical raw, revved-up, radical form, and embroiled Elektra Records in controversy over the title tune's loud-and-clear shout "Kick out the jams, motherfuckers!"

Some stores refused to stock the album; in response, the MC5 took out strongly worded ads in underground papers and, to Elektra's further distress, plastered one offending store's windows with Elektra stationery on which was scrawled, "Fuck you." Elektra and the MC5 parted company shortly thereafter, but not before the band had cut another version of "Kick Out the Jams," with "brothers and sisters" substituted for the offending expletive. (It was available as a single and on some subsequent issues of the album, against the band's wishes.)

When Sinclair went to jail on a marijuana charge, the MC5 was left with neither a manager nor a label. Atlantic signed the group, and its debut was produced by rock critic Jon Landau. Back in the USA was hailed by critics as one of the greatest hard-rock albums of all time. Record sales were almost nil, however, and never improved.

Dropped by Atlantic, the band went to England but soon fell apart, with Michael Davis and Dennis Thompson the first to leave. Rob Tyner had some success as a songwriter and photographer; he died of a heart attack in 1991. (The remaining members reunited to play a benefit concert for Tyner's family.) Davis went on to form the Ann Arbor band Destroy All Monsters, with ex-Stooge Ron Ashton; Thompson struggled with abortive solo ventures; and in the late '70s Smith formed the Sonic Rendezvous Band, which toured Europe with Iggy Pop and recorded one single.

Remaining in the Detroit area, in 1980 he married Patti Smith, with whom he had two children; in November 1994 he died from heart failure. In the mid-'70s Wayne Kramer pled guilty to a cocaine-dealing charge and spent two years in prison, where he played music with jazz trumpeter Red Rodney.

The three remaining members rejoined in 2003 with a slew of guest musicians, from David Vanian of the Damned leading vocals to Nicke Andersson of the Hellacopters on bass, forming DKT/MC5. The group toured throughout 2004-2005. Michael Davis was injured in a motorcycle accident in May, 2006. Sadly Michael died Feb 17, 2012.