MC5 WANTED TO BE THE BEST ROCK N ROLL BAND! 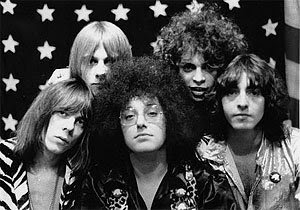 My favorite MC5 Record was the first record that we produced ourselves. We had a producer who was a "stable" producer for Atlantic, Geoff Haslam. He had an English background, so we recorded a couple of tunes in England. We were touring; at that point in time in our careers, we were spending a lot of time in Europe. And we did, I believe, "Sister Anne" and...two tunes in Europe.

But Geoff would sort of work with us and not tell us what to do, and let us sit behind the board and play with the dials and the mix, and let the whole group sort of work at it together, and then when it came down to a mix-down, we all would defer to Fred...let Fred and Wayne and Jeff do the mix. And finally we came up with a product that should have been released as our first one, 'cause that's pretty much how we played when the band started. MGT interview with Ken Shimamoto

The 5 hated The Vietnam War and Police Oppression but their music was everything.... The Politics of this country were changed forever BY THE MUSIC OF THE MC5 Our Vietnam was here. Our brothers, cousins, best friends went to this crazy ass war in the 'Nam for no, absolutely no reason. It was insane. We in the Five remained in the U.S.A. and played the music. Now, we got to meet a lot of vets. And a lot of kids would come up to us all over the country crying their eyes out, saying "I just got my notice from the draft and I don't wanna die. What can I do?" And we'd tell them from the benefit of our experience, Essentially. And we started losing a lot of friends at that point in time and the reason that we would say, that anyone would say that we were like Vietnam vets is that we were veterans of Vietnam, but we were here on the home front, defending the right of America to say, "No,
this has to stop." MGT


So you've now you have Rage Against the Machine, Nirvana, Pearl Jam; y'know, the cross hairs sorta center on whatever you hear...these musicians are aware of the Five. Which makes me very, very proud. MGT