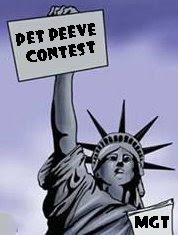 We had a ton of really great peeves! But the big winner is Al King:

1. The Rock n Roll Hall of Fame. who in the fuck is running that operation? They wouldnt know Rock if it hit em upside side the head with a Roll.


2. People that think the internet is a real place.


4. People that correct my spelling when they clearly get the point of what I'm saying in a an email. I'm a Drummer, I count, in time, better than most.


5. People that get me off the point of what I'm trying to say by forming a different opinion than me just for the sake of arguing because THEY are bored.