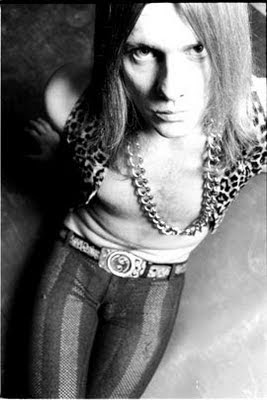 One of the very first photographs I found of Machinegun when I started to build a mock up blog to show him was this cool shot below with the leopard vest, striped pants and chain. Perfect retro clothing for that time period. Had no idea who the photographer was until last night!

As I was working I received an email from MGT's pal Carlton/Easyaction. I clicked onto Carlton's website and saw this awesome photo above! OMG! That leopard vest! This shot was clean and I wrote back to Carlton to find out who the photographer was.

Carlton replied that the photographs were expensive and done for an MC5 box set he produced in I think 1970. Carlton what was that date and name of that set? Cane the fans still order it from EZ?

Anyway I love these photos and Dennis Machinegun Thompson has earned his place in rock n roll history next to all of the other celebrity legends that Ms Rubenstein has photographed! 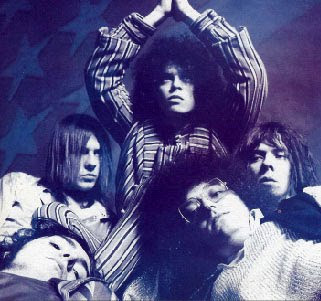 From Raeanne Rubenstein's early days as a fashion photographer in London through her portraits of celebrities to her creation of an online women's magazine, Raeanne Rubenstein has worked with some of the biggest names in movies, music and pop culture. Beginning in the 1970's, Rubenstein made her name in New York City shooting such celebrities as Machinegun Thompson, John Lennon, Muhammed Ali, Dustin Hoffman, Jimi Hendrix, Janis Joplin, Mick Jagger, The Beatles, Andy Warhol, Francois Truffaut, Jim Morrison, KISS, Pink Floyd, John Belushi and Rod Stewart, to name a few. The New York native went on to work for Rolling Stone, The Village Voice, People, Time, Life, CBS and HBO. 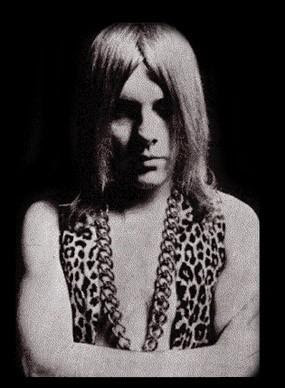 She has published ten books of her work, the latest being a 2006 luxury cocktail table book titled "Country Music: The People Places & Events That Shaped The Country Sound" that included over 250 of her pictures, as well as contributing photographs to many more books, such as "Angels Dance, Angels Die", a biography of Jim Morrison, a recent Gaggosian Gallery Andy Warhol retrospective, and many more.

She has contributed her photographs to numerous record covers, and film and television documentaries. She has had numerous exhibits of her work in galleries and museums, including the Nikon House Gallery, Time-Life Portrait Gallery in NYC and the Emerson Gallery in Dublin, Ireland.

Ms Rubenstein's photography Website is HERE
Her online magazine is Dishmag.com
Her Books are HERE