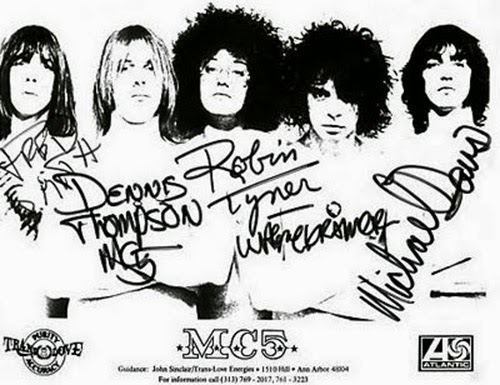 This forthcoming series of articles....beginning with this one... from many famous authors.... I am presenting to my readers, so you can know me a little better...MGT

The MC5 is an American rock band formed in Lincoln Park, Michigan and originally active from 1964 to 1972. The original band line-up consisted of vocalist Rob Tyner, guitarists Wayne Kramer and Fred "Sonic" Smith, bassist Michael Davis, and drummer Dennis Thompson. "Crystallizing the counterculture movement at its most volatile and threatening",[1] according to Allmusic critic Stephen Thomas Erlewine, the MC5's far left political ties and anti-establishment lyrics and music positioned them as emerging innovators of the punk movement in the United States. Their loud, energetic style of back-to-basics rock 'n' roll included elements of garage rock, hard rock, blues-rock, and psychedelic rock.

The MC5 had a promising beginning which earned them a cover appearance on Rolling Stone magazine in 1969 even before their debut album was released.[2] They developed a reputation for energetic and polemical live performances, one of which was recorded as their 1969 debut album Kick Out The Jams. Their initial run was ultimately short-lived, though within just a few years of their dissolution in 1972, the MC5 were often cited as one of the most important American hard rock groups of their era.[3] Their three albums are regarded by many as classics, and their song "Kick Out the Jams" is widely covered.

" How come they get all the accolades from almost every damn band worth it's salt on the planet, but the cretins who vote bands in to the RnR Hall of Fame are yet to recognize them? Hell I guess they should just cut off their ear's (DKT-MC5) and send it to those deaf, dumb and blind cats. That institution is not legitimate until the MC5 are in it. Period! WM. FRD 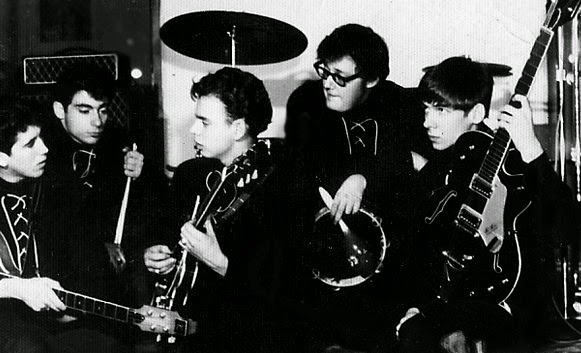 The origins of the MC5 can be traced to the friendship between guitarists Wayne Kramer and Fred Smith. Friends since their teen years, they were both fans of R&B music, blues, Chuck Berry, Dick Dale, the Ventures, and what would later be called garage rock: they adored any music with speed, energy and a rebellious attitude. Each guitarist/singer formed and led a rock group (Smith's Vibratones and Kramer's Bounty Hunters). As members of both groups left for college or straight jobs, the most committed members eventually united (under Kramer's leadership and the Headhunters name) with Michael Fraser on vocals/bass and Grant Palmer on drums, and were popular and successful enough in and around Detroit that the musicians were able to quit their day jobs and make a living from the group.

Kramer felt they needed a manager, which led him to Rob Derminer, a few years older than the others, and deeply involved in Detroit's hipster and left-wing political scenes. Derminer originally auditioned as a bass guitarist, though they quickly realized that his talents could be better used as a lead singer: though not conventionally attractive and rather paunchy by traditional frontman standards, he nonetheless had a commanding stage presence, and a booming baritone voice that evidenced his abiding love of American soul and gospel music. Derminer renamed himself Rob Tyner (after Coltrane's pianist McCoy Tyner). Tyner also invented their new name, The MC5: it reflected their Detroit roots (it was short for "Motor City Five'), was vaguely reminiscent of a sports car name (like the GTO), and echoed the Dave Clark Five, at the peak of their popularity in 1964–1965. In some ways the group was similar to other garage bands of the period, composing soon-to-be historic workouts such as "Black to Comm" during their mid-teens in the basement of the home of Kramer's mother.

The music also reflected Smith and Kramer's increasing interest in free jazz -- the guitarists were inspired by the likes of Albert Ayler, Archie Shepp, Sun Ra and late period John Coltrane, and tried to imitate the ecstatic sounds of the squealing, high-pitched saxophonists they adored. The MC5 even later opened for a few U.S. midwest shows for Sun Ra, whose influence is obvious in "Starship". Kramer and Smith were also deeply inspired by Sonny Sharrock, one of the few electric guitarists working in free jazz, and they eventually developed a unique interlocking style that was like little heard before: Kramer's solos often used a heavy, irregular vibrato, while Smith's rhythms contained an uncommon explosive energy, including patterns that conveyed great excitement, as evidenced in "Black to Comm" and many other songs.
Success in Detroit 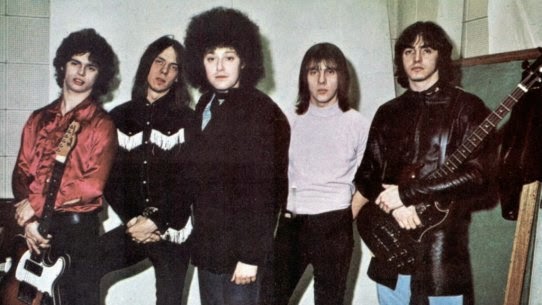 Their debut single was released by Trans-Love Energies in early 1968, comprising two original songs: "Borderline" and "Looking at You." The first pressing sold out in a few weeks, and by the year's end, had gone through more pressings totaling several thousand copies.

That summer, MC5 toured the U.S. east coast, which generated an enormous response, with the group often overshadowing the more famous acts they opened up for: McLeese writes that when opening for Big Brother and the Holding Company audiences regularly demanded multiple encores of the MC5, and at a memorable series of concerts, Cream — one of the leading hard rock groups of the era — "left the stage vanquished" by the Detroit upstarts. (McLeese, 65) This same east coast tour led to the rapturous aforementioned Rolling Stone cover story that praised the MC5 with nearly evangelistic zeal, and also to an association with the radical group Up Against the Wall Motherfuckers.

The MC5 became the leading band in a burgeoning hard rock scene, serving as mentors to fellow South-Eastern Michigan bands The Stooges and Up, and major record labels expressed an interest in the group. As related in the notes for reissued editions of the Stooges' debut album, Danny Fields of Elektra Records came to Detroit to see the MC5. At Kramer's recommendation, he went to see the Stooges. Fields was so impressed that he ended up offering contracts to both bands in September 1968. They were the first hard rock groups signed to the fledgling Elektra.