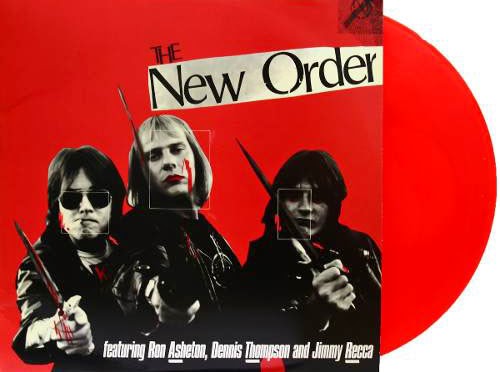 
The New Order was an American hard rock and proto-punk band. The band was based in Los Angeles and existed from early 1975 to October 1976.

This was at the same time that Iggy Pop was rehearsing with former The Doors keyboardist, Ray Manzarek. Ray and many underground rock fans had their eye on Iggy Pop to possibly become the heir to the confrontational, dark rock throne vacated by the death of Jim Morrison, which in some ways, Iggy actually did. Ray's early line-up also featured, (on drums and bass), the Los Angeles based brothers, Hunt Sales and Tony Sales, both Detroit natives who would later play with Iggy Pop on the albums: Kill City, Lust For Life and TV Eye Live 1977 and much later (1988-1992) with David Bowie in Tin Machine. Early on, both Ray's project and Ron's project, ironically, shared rehearsal space at a house owned by Ray.

The New Order recorded demos two times in Los Angeles: #1 in 1975 and #2 in 1976, each with a different lead singer. Both recordings were later released as a single vinyl album on the French label, Fun Records/Isadora, in 1977.