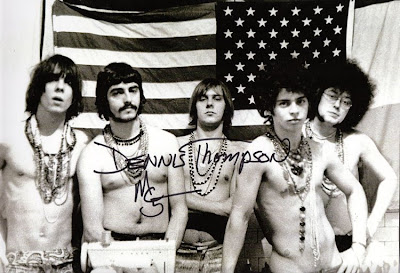 Marla Metelski Amen, Dennis.
Robert Henderson Yep . . .
Andrew Jody A true motherfucking TESTIMONIAL!!!
Heather Neumann Undesputed HW's forever.
Damo Musclecar I'm am forever grateful your band existed. The influence the MC5 have had on the world will live on for centuries. Nobody can take that away, nobody.
Craig Portman You kicked some serious ass!
Sherry Browning Byrd You guys rocked my world and gave me some of the best memories of my life and i wanna thank you
Sean Randolph Thanks to anyone & everyone who got KICK OUT on k-tel 2 lp set alongside many other bands like eagles, allmans, etc. Only Sabbath had harnessed anything close to the power. 1/3 of a century later i still rock just as hard the way i did then - and have a bigger allowance affording me to have picked up more MC5 - a big part of my secret elixir
Rex Hambone amen
Charlesette Hadden-Cook We are proud of you too. Indelible
Denise Sharpe I'm so proud to have been a big MC5 fan...You and the guys taught me many lessons with your music and attitudes, that have always been a part of who I am....Be who you want to be, stick up for yourself, be true to yourself, love others and stay cool....Thank you, love ya
Judith Anne Stefaniak Webber Loved, loved, loved those nights at the Eastown Theater!
George Kerby My ears still ring from the Grande shows, but it was worth it !
Mark Christopher Ran into your cousin Don at Metropark yesterday- sez 'Hi!'
Bogdon Vasquaf Amen !