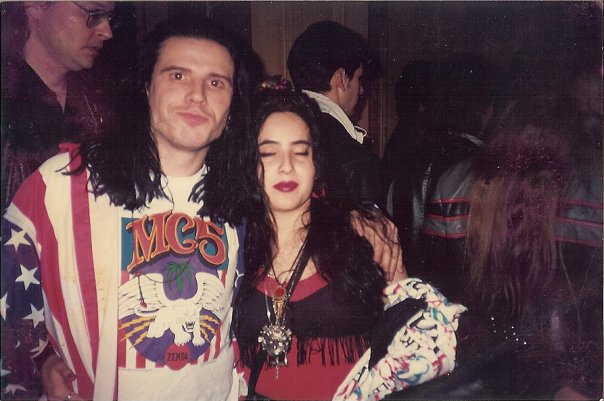 Very early 1992, State Theater, Detroit. Ian and I both went to see the Rob Tyner benefit show...he got to play it, and I got to meet him. There's a story behind this photo. I left Argentina in early Dec 1991 (age 18), coming to the US was something I had wanted to do for a long time, a dream of sorts.

Another dream I had was to see The Cult live, who had never played Argentina at that point. As soon as I bought my ticket to come to the US on Dec 6, news broke that The Cult would be playing in Argentina on Dec 8. **I wanted to die** and I couldn't change my plane tix. I was so happy to be in the US, yet I couldn't believe my luck and wanted to cry that I was missing The Cult.

I had been obsessing over this and one morning I woke up to realize I had had a dream about The Cult, but couldn't remember exactly what. Being new here, I had been inquiring about the music scene, where to hear/find music, and someone had mentioned that I should listen to a radio station called 89X. I did that later that same day, only to find they were advertising that The Cult would be playing Detroit that February. Not once, but 2 nights in a row at the Fox Theater. I couldn't believe it, talk about a happy ending!

Of course I got tix for both nights. After I had gotten tix I found out that there'd be hosting the Rob Tyner benefit show right next door at the State Theater, featuring a long list of amazing bands, so I figured I would hit the Rob Tyner benefit as soon as I got out of the Cult show at the Fox. And so I did...together with The Cult. In the meantime, I had managed to sneak in a camera hidden in one of my boots to the Cult concert, which meant that I had also had a camera on me when

I ran into Ian by the balcony at the State, hence the pic. Later that night The Cult took the stage to do a few songs as special guests at the benefit. To make a long story short: I did miss The Cult by 2 days in my home country, but then got to see them THREE times in a row within a span of 24 hours!I