MC5: DENNIS THOMPSON INTERVIEW WITH KEN SHIMAMOTO FOR I94 BAR 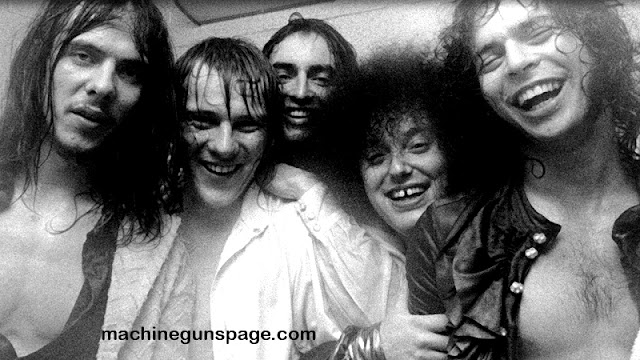 Besides being the party who propelled the MC5 (and New Order, and New Race, and The Motor City Bad Boys, and...) into the stratosphere with his percussive power, Dennis "Machine Gun" Thompson [pictured above, with the MC5] is also undoubtedly the greatest living high-energy conversationalist on the planet. He talks the same way he plays the drums -- energetically, assertively, aggressively, thoughts spilling over each other two or three at a time, punctuated by explosions of laughter.

Ken: What have you been up to lately?

Dennis: Well, lately I've been trying to become a priest, but they won't let me. I've got a CD coming out called Phantom Patriots, Volume One. I'm shopping a label. There are two or three labels that I'm courting; I'm looking for the best distribution deal, and I want accountability for sales. When you work with independent labels, you don't get that.

Ken: Who are some of the people involved?

Dennis: Well, the first round are local people. That's Joey Gados, who played with one of Rob Tyner's MC5 bands; Pete Bankert, who plays with Dark Carnival, has played with, oh Christ, 15 bands, he owns a studio; and Tommy Ingram, who is a young singer, but...he's done the Detroit thing. It's a very powerful unit.

Ken: Can you describe the music?

Dennis: Well, the first CD is straight-ahead rock and roll. It's bad-ass rock and roll; the songs sound like MC5, the Stooges, Metallica, Pearl Jam, Nirvana; we cover the spectrum.

Dennis: What it was, was a spoken invocation to "Kick Out the Jams," and this was at the Heidelberg in Ann Arbor, three weeks before he died. He was just preaching the Gospel for four minutes. So while I'm wrapping up this Phantom Patriots CD, Pete and the guys shut off all the lights in the studio and said, "Hey, Dennis, why don't you just go crazy, and be you, okay, just go!" So I did, I created a piece. I constructed an actual piece of artwork and I dedicated it to Rob and Fred. I cried a little bit, and I played. I played for four minutes.

Ken: How old are Wayne [Kramer] and Mike Davis now?

Ken: Can you expand a little on the concept behind the Phantom Patriots?

Dennis: The concept of the Phantom Patriots is a book I've been writing for ten years. Essentially it's a roman a clef of the experience of the MC5. The Phantom Patriots are everybody in this country who cares about improving the quality of life here. Raising the job standard level. Raising the educational level. Taking care of the children. All the things that need to be done. And the way to address this is, we'll be patriotic, but we'll be like spectres; we'll be invisible, we'll slowly change the people's attitude.

The idea is to try to remain invisible, try to get a lot of people working and having fun. We're not into it to make money, we're not into it to get laid, we're not into it to be rock and roll stars, we're into it for the love of the art of it all, and the philosophy of it all, and the politic of it all. I think it's gonna be a very, very beautiful ongoing thing. I see one CD per year. I'll be the one that's gonna be visible, and I'll use the MC5 name to market it. But each package is gonna be a creative package, which you don't get much, nowadays. You get standard art department kind of general puff. But I've got a guy who's very creative and artistic who spent three weeks on just the front cover so far. You know why? He doesn't make enough money at his day job and he needed something creative to do. That's sorta like the idea.  READ FULL INTERVIEW ON 194 BAR