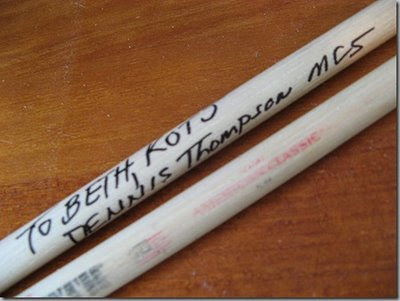 Hey MGT readers! Our blogger friend Beth from Nutwood Junction who is a fabulous writer... Did a really nice post on us tonight and being that it features the mighty Machinegun's sticks I thought we'd share a bit of her work with you.

I got a present!

Do you guys remember when I did a Beth's Music Moment entry about Creem magazine? And how I was so excited to get a comment from the drummer for the MC5, Machine Gun Thompson? Well, a while back, I got an email from Kim, who collaborates with Dennis on his blog, as well as writing a couple of fun ones of her own, Retro:Kimmer and The Snarky View. (Think I can cram any more links in here? Yep, there’s a tiny one!) She said that she and Dennis wanted to thank me for my support of their blogs, and wanted to send me a little present. Would I like a T-shirt, or a set of drumsticks signed by Dennis? COOL! Can you guess what I chose?

That's right, I've got tons of T-shirts, but I didn't have one single set of drumsticks. Shocking, I know! When we got home from Missouri, they were waiting for me. How utterly cool and thoughtful is that? Here's a closeup of his signature:

I couldn't quite get the entire thing in the photo, but it says "KOTJ," which of course, is Kick Out The Jams. When I opened the package, I raised the sticks over my head and did the "One two three four!" count. Haha! They are now residing happily in one of the curio cabinets, a little piece of rock and roll memorabilia. Thanks again, Dennis, you're a peach!

If you're into music at all, especially the Detroit scene, I recommend Machine Gun's blog. Plenty of great info about music, but he also writes frankly about his and others' addictions to heroin and other drugs. He made it through, but plenty of others didn't. It's a great read, from someone who was a participant in one of the greatest--and most political--eras in rock music.

The motto at Nutwood Junction is "Boredom is not an option." I think some of the lyrics to "Kick Out The Jams" might be sort of my guiding philosophy, though. I am what I am, and part of that involves an opinion or two. [wink] I really don't see myself ever backing away from that. Considering that politics is something that interests me greatly, I would feel like I wasn't being true to who I am if I didn't write about it.

And let me kick out the jams

Yeah, kick out the jams 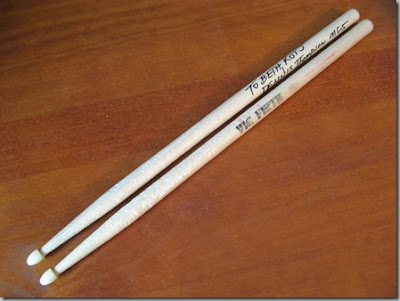 Thank you Beth what a nice post and we are really waiting for that book!