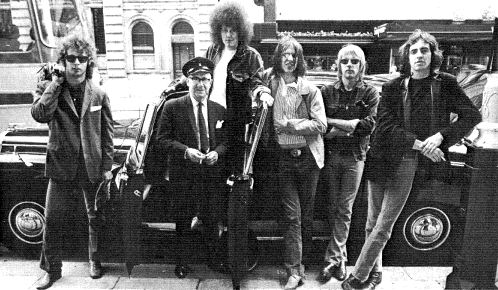 PSF: How did you first hear about the MC5?
In 1968, I was going to college in Ohio and heading back to Boston (my hometown) for the Christmas holiday. I stopped in New York to see some friends of mine who were signed to Elektra- Magic Terry and the Universe, they never recorded but they were kind of an aesthetically legendary band. They were the first band to put together poetry and rock and roll. This was the late '60's so there was no concept too grandiose or far out not to be tried. The idea of a poet screaming in front of a punk band wasn't out of the question. Danny Fields, the guy who bought the Stooges and the MC5 to Elektra, had signed them. All these bands quickly saw themselves as being part of the redefinition of the possibilities of rock and roll.

The first thing they said was 'you're going to school in the Midwest, tell us about the MC5.' I said 'what?' I had no idea what they were talking about. I got the whole MC5 spiel then and saw them do their first show in New York, a free show at the Fillmore run by a group of street people called the Up Against the Wall Motherfuckers. These are the same people who three weeks later would disrupt the MC5's show at the Fillmore. On this night, they had just played the Boston Tea Party and it was their first time out of Detroit to play. I saw them and I thought that they were hands down the best rock and roll band I had ever seen in my life. It's an opinion that I hold to this day.

In terms of the context of the time, it was still pretty hippy-dippy peace-and-love with three-hour solos. They were like a throwback to what the New York Times called 'rock's disreputable roots' but at the same time, they were forward looking, into free jazz and metal and all of that. It was like getting the best of both worlds, a reminder of the crotch-level impact of rock while at the same time aspiring to take it to places it had never been before. That just completely blew me away. Also from a performing point of view, they were probably the best rock and roll band I'd ever seen- no one else even came close.

PSF: Did you think there really was a Midwest scene that they were a part of?

In terms of bands like MC5, the Stooges, they all saw themselves as being an alternative to the alternative music that was then popular, epitomized by San Francisco peace-and-love. This was darker, a much more street level kind of a movement. All those bands and the people around them saw this as the next step beyond what was fashionable.

PSF: What about the politics that the band adopted with John Sinclair and the White Panthers? Was that sincere?

I think it was sincere. The situation with the White Panthers was basically that they started as a joke. You had all of them sitting around a big table in Ann Arbor smoking a lot of joints and saying 'wouldn't it be cool if there was something for white people like the Black Panthers?' They saw the Panthers as a group that gave black people pride and some sense to fight back against very real oppression that was coming down then. But the White Panthers started out as a joke really, almost an MC5 fan club. It wasn't until they announced the formation of the White Panther party and the 10 Point program that a lot of these ideas were made public. The reaction against it was so swift and powerful and frightening that a lot of these things that they had said tongue-in-cheek in the beginning suddenly came true. They then had to constantly defend themselves as a revolutionary party. It was a situation that started out one way and over the course of its lifetime, based on the political realities of the time, went a whole other way. I'm sure John Sinclair never saw himself winding up in jail.

You look at what they did with the politics. The Black Panthers did education programs and food programs. The White Panther party, as a political entity never really did much. It was just a name. As soon as you put a name to it, you also made it a target. It sort of pushed things in a radical direction that was pretty extreme.

PSF: The band eventually broke with the Panthers and Sinclair. What's the story behind that?

You get a different story about that depending on whom you talk to. John is still very bitter about that and feels that the band sold him out. Wayne Kramer, who now has a close personal relationship with John, tends to be a little more philosophical about it. There are other people in the band who feel other things. You're talking about a situation where each individual has a completely individual take on each situation and they don't always tally up.

Personally, I see the break with Sinclair as being inevitable just because there was so little real organization in the White Panther party as a political situation. The way it came down and the time it came down and the way it looked was far from ideal. When John went to prison, there was no one else there who could take over the reins of the MC5 on a day-to-day basis. If they had had a stronger organization, I think that they probably could have survived all that stuff with the band's associations with Trans-Love Energies, which was what it was called originally. Incidentally, after they were called the Panthers, they were The Rainbow Peoples' Party and they actually did organized politically and did accomplish some real things.


PSF: You were talking about how they incorporated jazz into their music, even before Miles Davis was doing it.

A lot of that comes from Rob Tyner, in the beginning. He named himself after John Coltrane's piano player McCoy Tyner. John Sinclair is widely credited with pushing the band into the free jazz area because that was his main love. But in truth, the band had been exploring that even before they met Sinclair. He gave just gave them the confidence to go further down that road. Rob had been this suburban Detroit beatnik in the early '60s who thought that rock and roll was dead and corrupt. He was only into jazz and blues and was later brought back to rock and roll by the Rolling Stones. But those kind of ideas were there already, as John himself will tell you- they were already floating around in the band by the time that Sinclair found them. In fact, that was one of the things that appealed to him- here was this rock and roll band that had these out-there ideas about what they wanted to do with rock and roll music. John, who had been a jazz snob and rock and roll hater, had seen that here was a rock and roll band that was doing something interesting.

PSF: Compared to the fusion music that came later, how successful do you think the band was with this idea?

I don't think they were very successful with it. You go back and listen to their great jazz-rock epics and not many of them hold up these days. Compared to the very rigid stylized thing that it turned into as fusion, at least there was something fresh about the MC5's exploration of those areas. This was coming from kids who didn't initially aspire to become jazz musicians and didn't have the jazz chops. All those ideas had been filtered back through musicians whose prime inspiration had been Chuck Berry. It was a different thing from the slick thing that fusion would become. I suppose it was more like punk-fusion than anything else.

PSF: How well did their first album capture what you'd seen in their live shows?

To me it didn't really come close. The tragedy of that album was that it was recorded in October 1968. The band had been performing that particular set for the better part of the previous year. In my view, they played that set at that time once or twice too often. It was just kind of past its peak as the set goes. It's exciting, dynamic, crazy, wild and wonderful but compared to the MC5 shows that I saw (I never them prior to recording that album), it's somewhere in the middle. It's not even close to the MC5 but does it kind of get that glorious energy of the moment.

PSF: Why was there such a huge change in the band's sound by the time of the second album?

Because of the volume and because of the primitive quality of the music that they played, the MC5 tended to be dismissed by serious music people as just noise-mongers. It was a very definitive desire with the second album to prove to the rock and roll establishment that the MC5 were great musicians, which in fact they were. From my point of view, they cared far too much about that and the second album was as extreme in its way as Kick Out The Jam had been in its (way). They went to the opposite extreme. One's as bad as the other to me although somewhere in the middle is the ideal MC5, of my dreams anyway.