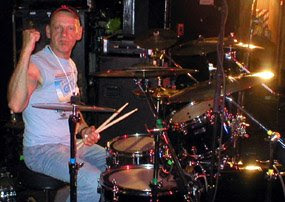 I have a special treat on the drawing board. How would you like to see the one and only legendary Johnny “Bee” Badanjek (a drumming hero of mine) and the legendary MGT perform a dueling drum battle live on YouTube and my Blog? Raise your hands!

Here are some artists the Bee has worked and recorded with:

I will interview The Bee man, and he will interview me and we will create some drum music together. Johnny Bee is a drummer I have respected since Mitch Ryder and the Detroit Wheels first came out with “Jenny Take a Ride” back in 1965?

The Bee was rockin’ his ass off with drive and propulsion unlike any drummer before him. Man could this dude play the drums! Then they released “Devil With A Blue Dress”, and he did it again.
But in this tune he was the first drummer to come up with this signature fill-in lick that went boom-bop, boom-bop, boom-bop, boom-bop, Boom-Bop! Isn’t that right Johnny? I thought that was the trickest rock drum lick on the planet, and I was sold.

I and thousands of drummers after me have “borrowed” this trick lick and added it to our own repertoire of fill-ins. I gotta few of my own too. But that’s another story. It was not soon after those record releases that our two bands, (The Five and The Wheels) crossed paths and shared billings. I would watch their set and the whole time my eyes were glued to the Bee. He is probably the most solid “pocket” drummer in the world. You can set a metronome to his timing. 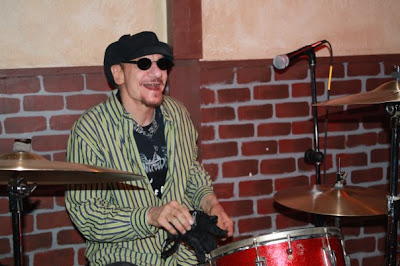 I watch drum battles all the time on YouTube. They are fun, and very inspiring to me. They are not really “battles” but more like two talented drummers talking to each other through the oldest medium in the world. Just beatin’ on the logs.

Tribes would announce weddings, upcoming danger of an attacking outsider tribes, and group hunts by beating on the hollow log drums.

Take that all you arrogant ego maniacal guitar players who think that drummers and bass men are just sidemen. We are the message and the medium. Hell we are the leaders and the back beat of the band.

For your vast enjoyment listen to the one and only Johnny Bee Badanjek: