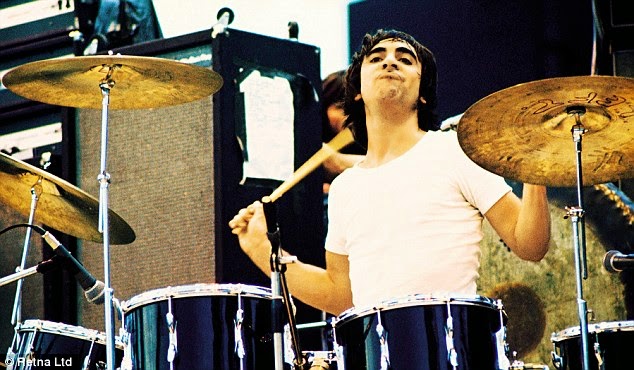 Yes, I have met Keith Moon. He was the legendary drummer of the Who. The man was from the future, no doubt. Met him at three or four shows that the MC5 and the Who played together.

One day in the early 70’s we got drunk together with John Bonham, drummer from Led Zeppelin at a bar in Hollywood. I was playing with the New Order at the time. Don’t ask me what we talked about. We were all out of our ever lovin’ minds. Wasted and nuts, and loudly having too much fun. (If there is such a thing.) John’s bouncer was there and that was a good thing. He kept the fans and the trouble away.

In case you don’t already know, Moon was one of my drumming mentors. He was stupid good and stole the Who’s show every time they hit the stage. Why?

Manic energy laced with enthusiasm, showmanship, and incredible drumming, this guy was way ahead of his time. You could not help but stare at him.

The first time I heard “My Generation” by the Who, I was driving home from working an afternoon shift at a Shell gas station north of downtown Detroit. I got on the freeway and this w-w-way c-c-cool stuttering vocal and tricky musical breaks were blasting from my crummy old radio.

I had a ‘58 black Ford back then. “What a snappy tune I think to myself. Hhhmmm, sounds like the Who, from “Can’t Explain” popularity.” Yup, sure was. Then all of a sudden this drummer goes nuts, and he is playing in time. A manic explosion under a repeating chorus. WOW! My Kinda Drummer!

I had to pull to off the shoulder of the freeway to hear the rest of this tune. I sat there for ten minutes after the song was finished and promised to myself that moment that this was the future of drumming and I was going to snatch every good lick from this Keith Moon bastard. No single drummer ever floored me like this. Never. Not even Mitch or Elvin.

I was mesmerized at how good he was. I went out and bought their first album and proceeded to listen and learn. So I “borrowed” his attack style. He is one of my top 4 drummers on the planet. You can definitely hear his influence in my own style of drumming.

The Who is my kind of band. Great show, great tunes, great vocals and background singing, hell, great everything! They were not afraid to take risks, and neither am I. God Bless Keith Moon. His legacy as one of the greatest rock drummers will live on forever.

Yours in Cacophony,
MGT