THE UNITED STATES OF CHINA WEST 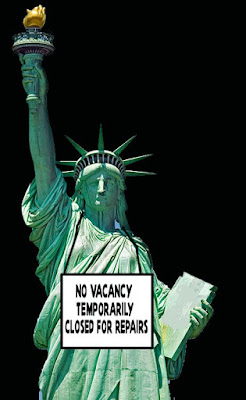 NO VACANCY—TEMPORARILY CLOSED FOR REPAIRS!

Imagine what could be accomplished if we focused on our own backyard!


Before I am no longer alive, I would love to see a huge sandwich type placard board hanging around the Statue of Liberty’s neck. It would simply read, No Vacancy—Temporarily Closed For Repairs! What series of events would have to transpire before we could hang such a board? The mind reels…

We have been snookered in the past by the government, Wall Street, Madison Avenue, and Corporate America. Certainly not shocking news. We boomers opted to work within the system. This is the polite way of putting it. We sold out is more like it. Idealism simply gave way to harsh reality. Bills, death and taxes.


Working within the system more realistically translates into working, period. The rat race is running harder and faster than ever. Dreams of turning America into an altruistic empire died with the advent of world wide industrial competition, especially in the manufacturing of durable goods.


The rich and powerful have existed throughout mankind’s history. This is part of the problem no one likes to talk about. I think I read 95% of the world’s wealth is controlled by 5% of the population. Bloody revolutions have come and gone all throughout written history.


What does this have to do with change in America? Simply, the fact that everything just might get much worse before it gets much better. We need to dig in, and help each other now before the new age soup lines get longer.


I pray to God the Motor City doesn't burn again. Michigan is in a depression, not a recession. It is up to us and the politicians to prevent this. We really need to wake up and watchdog our elected officials like never before.


Obama is not a prophet and a miracle worker. He is just, hopefully, the right man right now. But you better believe he needs our help.


You better believe it…