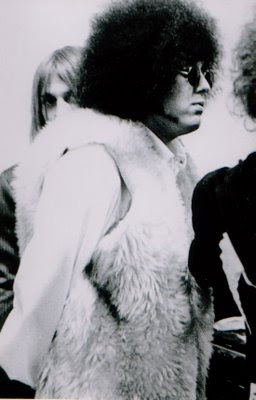 Rob Tyner was always pretty darn calm. This era was a great brewing stew of development and self seeking awareness of who we were versus what we were becoming. Here we were creating history and I didn’t even suspect that fact. To me, life was a dream then.

I really liked Rob. Later on in the touring days of the band he and I would room together. When we lived above the Artists Workshop I used to go and hang in Rob and his wife Becky’s room for hours at a time. Rob would be at his drafting board/table always doodling, creating great cartoons and writing lyrics to songs. He was as close to a mentor as I ever got.

I remember us discussing the improper positioning of the word “out” in “Kick Out The Jams” as he was penning the lyrics. We discussed the impact of saying out right after “Kick” as opposed to “Kick The Jams Out.” He would say the phrase and embellish the word “out”. He knew it was grammatically incorrect, but he told me there was more power to the phrase with the accent on the word “out.” We would burn a doob and talk about what KOTJ could mean in a hundred ways. He was a very thorough poet. I really miss Rob.

He was the poet/philosopher of the band and I related to his raw intelligence as I considered myself to be fairly intelligent too. After all, I was majoring in physics at Wayne State University and if I could get through those courses I must have at least a few synapses firing. 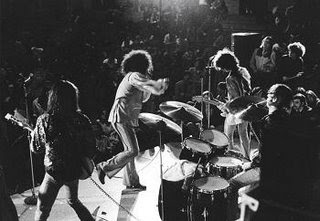 Fred Smith was another story altogether. I did not understand this guy. Nor did I like him much at all. He seemed too radical for my taste. He didn’t shower for long stretches and his body odor was overwhelming at times. Ever smell a Kiss costume? I have, whew, damn, get it cleaned already!

It was like Ace Frehley at a bar in NYC. (Kiss is playing Detroit on 9-25-09 at Cobo Arena.) We were all hanging out and I could smell this guy from across the street as he was still wearing his cartoon outfit from a gig they had done. We had done one as well and we bumped into them at this late night bar.

Christ, with his platform shoes his head almost touched the ceiling. Hilarious to me to this day. We picked on him mercilessly, as we were always known to do to our competitors and fellows in the game. 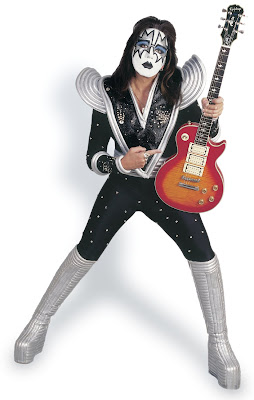 Anyway... Fred was a relatively quiet guy. I grew to look up to him because he understood Bob Dylan’s lyrics. I would hang in his room at the Workshop and he would play Dylan songs on an acoustic guitar and some times I would ask him about a line or two of a Dylan tune I did not understand and Fred would explain it to me. Thanks Fred. I’ve got a few great stories on Fred I’ll get to in part 2.

Each and every one of the five guys had a distinct personality that was highly unique and powerful. But then you get them to work together and it was like splitting the atom. Incredible synergistic power! Atom Bomb League of un-gentlemen indeed!

Wayne Kramer was another matter entirely. He’s a Taurus and a leader in his own right. So am I (a leader), but I deferred to these guys back then because it was the right thing to do. Drummers did not lead bands for the most part unless you talk about the Dave Clark Five, Genesis, Gene Krupa , Louis Belson, and the great Buddy Rich. Hell, I was happy just to be in this art and music factory. So much raw talent it was a creature unto itself.

Wayne was a hustler. He got things done. I did not hang with him or Mike in this period much at all. We got along well. They were Bohemians and I was more conservative at that point in my MC5 career. Later on, I would become the band babysitter in one of our slower times. We lived off my father’s credit card.

We drove to gigs in my mothers Rambler. I remember us driving home one night and I knew it was burning oil. Could not find a gas station to buy oil till it was too late. Drove right into my folk’s driveway with a loud rod knock.. Dad was pissed! My, my, I did it again. Sorry Dad.

Back in this period the band really worked well together. We were simpatico and open minded to ideas from anyone who brought an idea to the round table. This lifestyle chemistry worked so well, our music became an expression of our lifestyle. We coined the term High Energy Music. 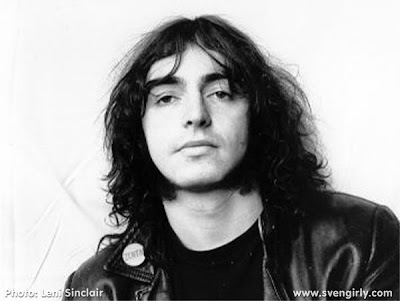 Michael Davis was a mystery to me in the early incarnation. He was an art student at WSU and was older than the rest of us. We all went to the same high school (Lincoln Park High) except Mike. He went to wherever I don’t remember. He was very good looking and always had these art nouveau girlfriends hanging out with him. I like Mike a lot and we hit it off pretty good then.

All in all, we had such great times it’s hard to explain. I think we all drew from each other as young men growing up and we felt like an attack Navy Seal team. We were big too. Our average height was right around six feet tall. You did not mess with the MC5 or there would be 7 guys on your butt, kicking it.

I will tell of some shocking stories of this era in the next post. This will be a 3-4 part series into how I saw this band, from my own point of view. We were the undisputed heavyweights of Detroit in 1966 bar none, and I was proud to be a part of this squad. Damn proud…