WHAT THE MC5 MEANT TO ME: A LETTER FROM MIKE 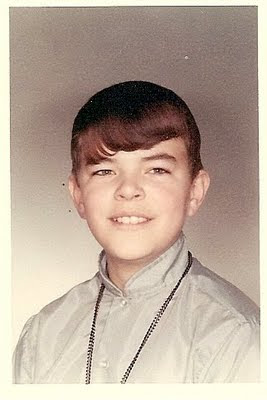 I'm generally not inclined to pour my heart out in public forums, but I need to try and convey to you what the MC5 has meant to me. I've written this many times in my head but it's been hard for me to start trying to put it into writing.

As I probably told you in my previous email, I discovered the MC5 by reading 16 Magazine of all things - at the time it was the only place an inquiring 12-year-old mind in the Pittsburgh suburbs could read anything about his favorite bands. I hadn't discovered Hit Parader, Circus, and Rolling Stone yet. But there was a picture of you guys posing in front of the flag in 16, and I thought you looked really cool.

Next the Newsweek article, after which I was really curious to hear you - the way your sound was described was right where my taste in music was headed. I found the KOTJ album at a local mall in the spring of '69 and quickly absorbed it.

1969 was probably the most difficult year of my life, trying to make the adjustment from elementary school where I'd gone from kindergarten through 6th grade to junior high.

When I started 7th grade in the fall of '69 I was lost - new school, bullied by the derelicts in my neighborhood, turned on by my other neighborhood "friends". I was a wreck, and the only thing that helped me survive psychologically was music. The MC5 and Blue Cheer became my best friends that fall.

I played KOTJ constantly, trying to dig every note out of grooves while trying to isolate every photo in the cover collage. Couldn't wait for the next one, and Back In the USA came just in time. Forget what anyone else thought - all I knew was that it was the new MC5 album, and I couldn't get enough of it. The different sound meant nothing - it was THE MC5. Loved every song on that album and listened to it constantly - the underlying school/teenage theme was just perfect for me at that time.

I survived 7th grade and moved on, but my best friend, the MC5 has been with me constantly ever since. Bought High Time the first time I saw in the store, and actually heard "Gotta Keep Movin" played late at night on WDVE, the premier hard rock FM station in Pittsburgh (still is, actually, 40 years later).

Heartbroken to find out that you'd broken up, anxious to find anything related to MC5. At the University of Pittsburgh I discovered that the microfilm collection in the library included the Ann Arbor Sun and Argus, and all of a sudden I had a new wealth of information on the '5.

Reading about your shows at the Grande, Sinclair's columns, and now I wanted to hear your influences - Trane, Pharoah, Sun Ra. I started listening to all of them thanks to the MC5, first because I wanted to hear "Tungi" and "Upper Egypt", then I started to connect the dots and understand the common thread of energy, passion, and spirituality than ran through their music and yours.

I even found a copy of the Gold soundtrack and dug the two instrumentals "Train Music" and "Inside Out" - too bad you didn't have the opportunity to explore that direction further.

While living in Detroit in 1980 (downriver on West Rd. at the Marianne Manor Apartments) I acquired some recordings from Dialogue '68 at the 1st Unitarian Church, with that awesome "I Believe to My Soul"/"Black to Comm" which STILL floors me almost 30 years later.

More came sporadically over the years, but then in '94 when Sinclair started releasing tapes from his collection, it was a revelation, FINALLY getting to hear "Ice Pick Slim" (amazing - Elvin meets Keith Moon, and you were only 19 years old when the recording was made), "Upper Egypt", etc. Every recording I hear, every version of the same songs, makes me feel even closer to you guys. It's a strange feeling - I've met Michael a couple of times, talked to you on the phone once, and spent an evening hanging out with Becky Tyner and her daughters, but I don't KNOW any of you, but I feel like I've known you most of my life - does that make any sense? This has been a pretty lame attempt to describe feelings that are too deep and profound to describe. I don't know what else to say, except a cosmic THANK YOU for helping to make music that has consistently affected me more deeply than just about any other music I've heard. You guys were influenced by some of the most amazing music ever created, and you turned around and presented in a way that was more accessible to me, helped ease me into Trane and Albert Ayler and Sun Ra. Thank you for that. Thank you for being one of my main drumming inspirations - the drive and passion that drummers like you, Keith Moon, and Paul Whaley from Blue Cheer played with has been at the heart of my playing ever since. I enjoy every blog entry, and so many times you find ways to express feelings or ideas that I've experienced myself, especially the last one. How perfect is it that what you wrote about trying to improve and change yourself resonates "Are you going to be the problem, or are you going to be the solution?" How better to be the solution than to have the courage to look at yourself objectively and try to be the best person you can, rebelling against all the greed and selfishness and paranoia engulfing the world today? For everything - thank you! Best wishes, Mike